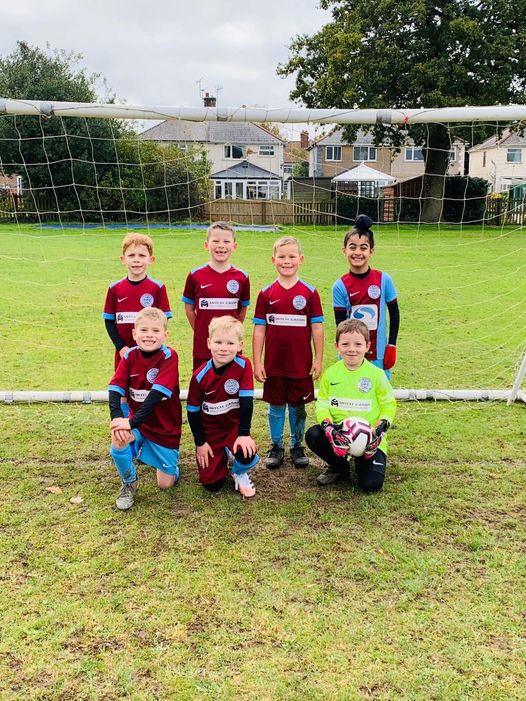 * FRIENDLY MATCH REPORT*
Rugby Borough Tigers U7 4 – 3 Hillmorton Clarets U7
After a lengthy wait on the sidelines, the boys followed up an energetic training session in midweek with a trip away at local neighbours Rugby Borough Tigers.
The boys were filled with excitement on a cold, windy morning and couldn’t wait to get playing.
The match was underway and as expected, both sets of players were slow and sluggish to begin with, trying to put their emphasis on the game and gain an early advantage.
Hillmorton showed early signs of promise after stringing a few passes together and pushing further up the pitch. Freddie’s distribution from the goal was good but the outfield players allowed the opposition to catch them out and Borough netted first.
A big response was needed and after quite a lot of substitutions, Clarets really began to pile the pressure on whilst having some really good spells of passing through the opposing players. The breakthrough came as Harman was played through into the opposing half and after dribbling around the last defender, Harman placed a low, curling shot past the GK into the bottom corner of the goal. 1-1!
More substitutes followed and Clarets finally started to believe they could win the game. Alfie M picked the ball up just outside his own penalty area on the left hand side and began to run with the ball at his feet, past 1 defender, and another … and another…. and before he knew it, he just had 1 more defender to beat. Alfie skipped past him with ease and from outside of the box, shot hard above the GK and was delighted to see the net bulge scoring his first ever goal! What a goal it was aswell.
The half time interval came and Clarets were leading 2-1. Clarets started the second half well but after Borough made a lot of changes, they really began to put the pressure on and Freddie became a lot busier, having to make an excellent save down to his right. Eventually, the pressure was too much and after a mix up in defence, Borough capitalised and made it level at 2-2. Clarets still tried to play positively, passing it where they could. Freddie was called into action again when he found the opposing striker running towards with the ball. Freddie closed the angle and rushed out from his goal, saving the shot and also holding onto it well. Freddie launched a massive kick upfield and it led to Ed being put through in on goal, with lots of time he snatched at it shooting from far out and narrowly put it wide past the left post. Clarets couldn’t make this good phase of play count and found themselves 3-2 down after a crazy bit of play between the 2 teams. The Borough midfielder drilled a shot down into the bottom corner and Freddie made an excellent save to keep it out, Borough followed it up with another shot which Freddie saved and then looped over his head and headed towards the top corner. The ball hit the post and bounced back and hit Freddie in the face, Borough then crossed the ball and Max devastatingly put it into his own net. Freddie stunned after the ball hit him in the face, conceding the goal was the least that he deserved!
The Clarets still began to show grit and determination to win this game and pressed with energy and desire to win the ball back. Out of nowhere Max hit a shot from the halfway line, with the small amount of spectators shocked and in anticipation of where the ball would end up. It wasn’t to be as the Borough GK made a great save tipping it up into the air and out for a corner. Hillmorton were rewarded with their efforts and Ed didn’t let his earlier miss affect him as he shot from 20 yards out and fizzed a shot past the GK into the side netting of the goal. 3-3 with a few minutes left to play! Clarets began to tire and the 3 months break was evident to see, Borough kept testing Freddie in goal and every shot they had went close.
It wasn’t to be after the Borough striker scored with just 1 minute left on the clock. Borough took the lead and then went on to win the game.
An excellent match played by both teams with plenty of goalmouth action and end to end phases of play.
Man of the Match – Freddie-Ray
He was outstanding in goal and made a hatful of saves to keep his team in the game. Perhaps if it wasn’t for him, the game wouldn’t have been so close!
Onto next week when the boys get back into league action!