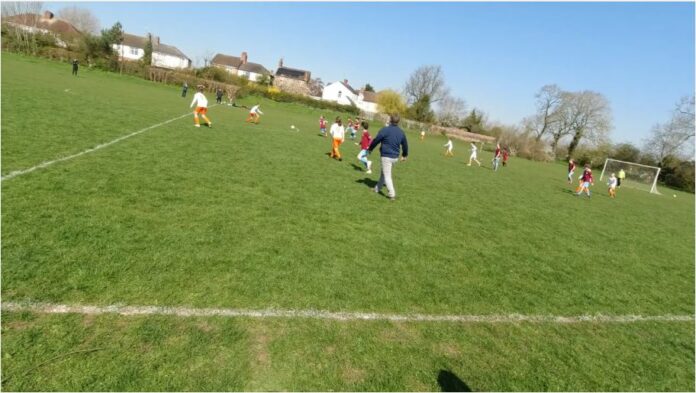 *FRIENDLY MATCH*
Hillmorton Juniors 3 – 1 Rugby Borough Eagles
What an absolutely lovely morning to come out of lockdown and watch a game of football, it was great to be back! Up against the Juniors were Rugby Borough Eagles, two leagues above us and likely to be a real challenge for the young Claret & Blues whose last game was back in December on a cold day at St Finbarrs. Conscious that the opposition were supposedly better, Hillmorton started in timid fashion, second to the ball and generally waiting for someone to take the lead. The opposition though lacked composure In front of goal and missed two chances to take the lead by blasting the ball over, when it could have been easier to score. This was the wake up call that Hillmorton needed and slowly they began to get back in the game. Against the run of play, Archie latched onto a through ball and the defender needlessly push him over, giving the referee an easy decision. Archie brushed himself down and despatched the penalty for 1-0! Hillmorton’s defence was tested but Riley, Arushen and Tom were all absolutely rock solid and formed the basis of all our counter-attacking play which was a pleasure to watch. The pace of TobyL, TobyB, Archie and Pacey was frightening at times and both Joseph and Mason needed very little encouragement to find them with accurate passing. It was Archie that beat a defender to cross the ball into the box and TobyB leapt onto a defensive mistake and sent his shot into the net for 2-0! The boys came in at half time having surprised themselves with their efforts and with smiles on their faces they knew that a 3rd goal would win the game. Pacey was pushed up front to take advantage of the long passes and within minutes he latched on to a through ball and hit a fierce shot that stung the keepers hands. A succession of corners created more pressure and both Mason & Riley looked a real threat in the box. It was another counter-attack from Hillmorton that sealed the win with Pacey sprinting clear, rounding the keeper and having been told previously to show some finesse in front of goal, promptly smashed the ball in off the post for 3-0! Phew! TobyL grew into the game on the right wing and had two lung busting runs through on goal but he just lacked the final touch to beat the keeper. Rugby Eagles managed a consolation goal when Hillmorton started to tire, which was the only blot on the copy book of a fine performance! It wasn’t pretty at times, but given they haven’t played together for 3 months some of the attacking play was brilliant. Our defence were superb with a special mention to Riley who gave a real captains performance out there and marshalled the back 3 with some real maturity. Well done!
League duties return next week with a double header against Leamington Brakes.
Onward and upwards!

Lest we forget: Binyon’s Ode of Remembrance