Sponsored by K.B Carpentry & General Building Services & Attingham Consulting Engineers Ltd
A match that the coaches had ear marked as 3 points was not to be as a physical Kenilworth team took the game to the juniors in the first few minutes. Joseph was injured in the warm up and Luis and I took the opportunity to shuffle the side and start with some of our usual starters on the bench. This allowed some of the other players to really show their worth, with Jakub making some great runs down the left hand side of the attack and playing some great passes for Noah to latch onto. Olly was kept busy though with a succession of shots, which he was more than equal to. Kenilworth began to force the issue and several fantastic corners from the left were increasing the pressure on the defence. Eventually a pin point delivery unfortunately found Riley’s shoulder and it bounced off him into the net for a fortunate but deserved lead. Mason came on and made an immediate impact by bullying the defenders and grabbing the game by the scruff of the neck, he was unlucky with several shots testing the keeper and hitting the post with an absolute pearler! The boys trooped off at half time and more changes were made in readiness for the second half. Joseph recovered enough to stabilise the midfield and Jay settled the defence. The boys pressed forward in search of an equaliser and it was Joseph that won the ball on the edge of his own box, who sent the ball forward to Mason, who turned in space and sent the ball ahead of Archie who raced past the defender and smashed the ball past the keeper and in off the post for 1-1! This was the influence that Hillmorton needed and it was clear who was now in control of the game and they seemed the team most likely to score. However it was a rare foray forward that saw the Kenilworth striker fouled in the box and the referee pointed straight to the spot. ‘Wobbly legs’ Olly did his best but could only watch the ball unluckily hit his ankle and go into the roof of the net for 1-2. This seemed to kills the boys enthusiasm for the game and the heads went down. It took another couple of Olly’s saves to keep us in the match and despite pressing for an equaliser with a few sporadic shots and runs forward they couldn’t muster the class or composure required to get back in the game.
MAN OF THE MATCH – Olly – The second trophy in a week for Olly, which illustrates his confidence, kept his side in the game with some great stops and his distribution was excellent! Top performance!
BEST EFFORT – Mason – Was a whirlwind of activity when he came on and dragged their defenders all over the place, great battler and got an assist too! Well done! 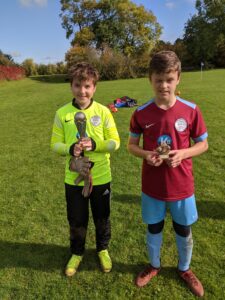