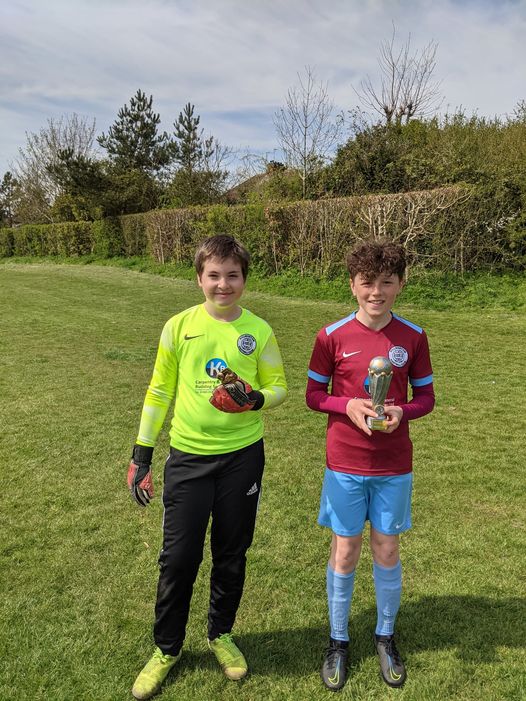 Sponsored by K.B Carpentry & General Building Services & Attingham Consulting Engineers Ltd
Coventry & Warks Youth League Division C
Bedworth United 2 – 2 Hillmorton Juniors
A reality check after last weeks mauling of Leamington for the Claret and Blues as they toiled for much of the game and never really got going until the second half. Within minutes the boys found themselves 2-0 down and Luis & I had to make some tactical changes to stem the flow of attacks from Bedworth. It took a while but Pacey slotted in at centre back well and made some significant tackles, whilst Olly made some cracking saves, got himself injured, promptly recovered and played with a confidence that started to flow through the team. This was illustrated by Jay whose pace down the right wing was frightening at times and he sent some teasing crosses into the box but alas no one was there to slot the ball home. Hillmorton trudged in knowing that they can play a lot better and in the second half they started to influence the game in a positive fashion. Bedworth suddenly found themselves on the back foot and it was pressure from Noah who worked tirelessly all game and found Mason, whose turn and shot from an accurate angle found the net for an all important goal. With a few minutes left the Bedworth boys started to waste time with an intention to see out the game. Cleverly the referee took note and the time wasting proved favourable to Hillmorton, Archie was brought down on the edge the box providing the Juniors with a last opportunity to rescue something from the game. Mason had me ringing in his ears to ‘hit the target’ half hoping that it would bounce back off the keeper for another player to hit home, but he calmly curled the ball in the top corner from a tight angle to send the crowd into raptures as the opposition coach was going apoplectic with rage! 2-2 it finished and the next game would prove equally as exciting!
Coventry & Warks Youth League Division C
Hillmorton Juniors 1 -1 Bedworth United
Hillmorton were by far the better side going into this game especially off the back of such positive ending to the last. The juniors created a host of chances with both Riley and Archie going close to opening the scoring, but it was Mason who broke the deadlock with a thunderous strike that the goalie could only palm into the top corner and again from an acute angle! Mason and Tom finally seemed to master the dangerous no.11 who was a handful all game, but we just couldn’t get the all important second goal. The second half would prove crucial and it was the opposition that found themselves back in the game after a looping cross was tapped in from close range for the equaliser. Hillmorton continued though to press forward and had much the better of it towards the end and a great cross from the right hand side found Noah Dew whose accurate shot found the corner for the second…… until the flag happy linesman spotted a dubious offside, so poor Noah’s celebrations were cut short.
In the end it was a frustrating game to watch as we all know that the boys can play better and 2 draws flattered the opposition. It was exciting at times and Mason’s free kick will live long in the memory, but neither team had enough quality to win it.
MAN OF THE MATCH – Jay – Startling display from Jay who ran the show in the first game with some amazing work down the wing! He slotted in at right back and did loads of work for his team in the second game, that didn’t go unnoticed! Brilliant!
BEST EFFORT – Olly – Wasn’t helped out by his defence in the first game but made some stunning saves in both games and his distribution of the ball was terrific! Outstanding!