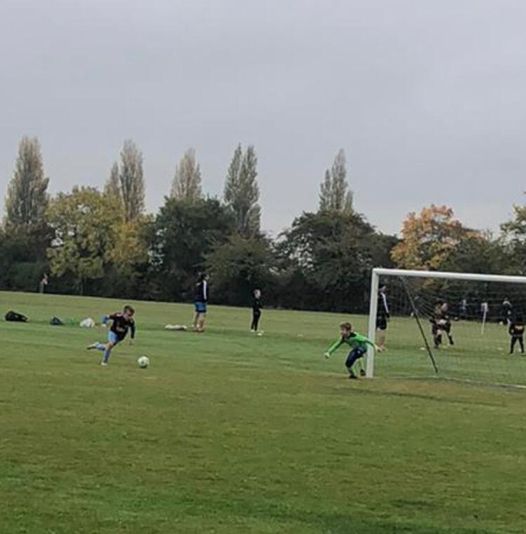 It was a slow start from the Hawks who managed to concede almost immediately from the kickoff, following a miss control in the box and CTK having the better of the initial exchanges.
The trickery of CTK’s winger caused problems for the team as he managed to skip past the dive in challenges of the right footed players standing in on the left whilst captain James remembered to put in his boots. However, ten minutes in, James entered the pitch and managed score with his first touch levelling the scores.
There were then chances from both sides with efforts from both Riley and James being saved by their goalie following their own good runs. CTK then hit the post Following a good team move.
CTK then scored a deserved halftime lead but their goal coming from a temporary drop in our effort, following a number of the hawks players stopping to watch from the halfway line in the hope that the outnumbered defence could manage to clear. The boys realised their mistake and didn’t let their head drop and following a positive halftime chat they took control of the second half. Defenders Harley and Isaac working their way into the game, to boss the 2nd half.
Finley’s goal kicks, improving week by week, produced a number of chances for his team. One saved well from both Lennon and Riley before an equaliser was scored in the form of a 3 pass move, starting at the back, going through the midfield and forward to Lennon who scrambled to slot the ball just over CTK’s goal line.
Man of the match, Lucas D, put in a shift to shut out the chances for CTK a number of times before creating one for himself following a fine solo run, fired into the back of the net to take the lead.
With 3 minutes to go, most would think the win was secure but the final few minutes were end to end. Jeremy and Reece recovering the ball well, managing a couple of good forward passes each and all attackers producing some fine passing football to produce three good chances for Riley to score which were thwarted by the CTK goalie. However, as quick as they had occurred, the ball went up the other end and CTK somehow managed to be unchallenged in the box to slot the ball home and equal the scores late on.
One further chance landed to Hillmorton, following a corner ball and with 30 seconds on the clock we held onto hope of a winning goal but it was cleared long and the final whistle blew to end all square between these two evenly matched teams.