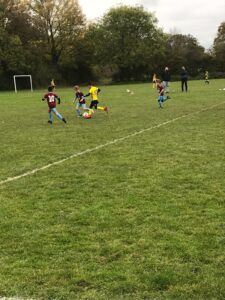 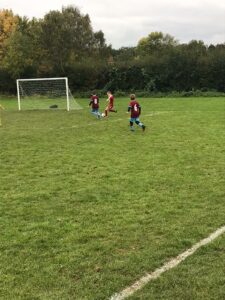 Hillmorton travelled to Leamington and put on another strong team performance.
The first 10 minutes were very even as both teams battled to gain control of the midfield. Hillmorton started to mount some pressure with wide players Charlie H and Max providing dangerous balls into the box which we couldn’t quite connect with.
The deadlock was broken when Riley finished from inside the box and he soon got another, skilfully bringing down a high bouncing ball and creating enough space to score a with a left footed strike.
In the second half Hillmorton really upped the tempo, attacking and defending as a team.
Riley grabbed another two goals, first pouncing on a loose ball to finish from a tight angle and then chipping the keeper. Paddy finished the scoring in style, rounding the keeper skilfully after a mazy run in the box. We continued to create chances. Max and Eddy delivered a number of dangerous balls into the box which we couldn’t convert and both were unlucky not to get on the scoresheet with good efforts going narrowly wide.
Defenders Daiton and Charlie T remained very focussed all match, quickly dealing with any danger and are starting play from the back with a growing composure.
Once again, Felipe was an important link between defence and attack in midfield. Covering, winning balls and releasing the ball early to teammates
More satisfying than the score was the clean sheet and some of the best passing we’ve seen this season.
MoTM went to Charlie H for his strong display in midfield, both in defence and attack
Well done boys…