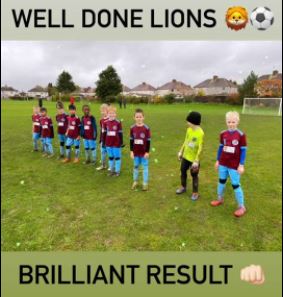 Match repot
Hillmorton Lions proved today that they are not afraid of any weather. The game started under a cloud of heavy rain, but it didn’t stop both teams from playing in good spirits. The first half belonged to us. Beautifully played ball from our boys. The goal was scored by Sonny D. who perfectly aimed the ball into the opponent’s goal from the corner kick.
Second half Racing Club Warwick started to play more aggressively and led some dangerous actions to our goal, but thanks to a great defense and a watchful goalkeeper, they did not manage to score. Instead, Lions played another actions that hit the opponent’s goal. One from Zavi G. and second from Tino M.
Drenched but happy Lions showed another good performance.
Man of the match : Sonny D.
Match report and graphics kindly sent in by manager Angelika