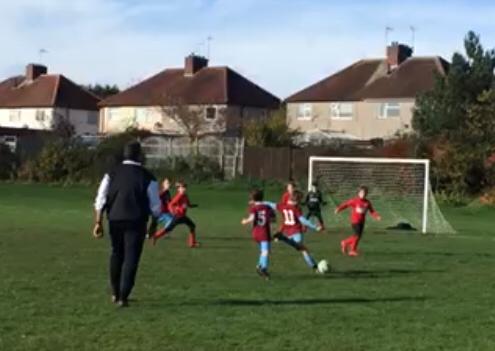 With a break in league fixtures the Hawks invited Crick over for a friendly game at Sunny Winfield Rec and the Hawks started the game well following an early goal from striker Riley T after a fine (and unselfish) through ball was given from Captain Lucas D.
However, this was quickly undone when Crick managed to score from close range after a momentary lapse in concentration from the defence gifted Crick a free kick following a sloppy back pass picked up by new goalie Fun who was unaware of the rule.
The boys didn’t let it affect their play and they carried on producing good chances, with one landing for Riley from a penalty after a Crick player mistakenly caught the ball in the box. Unfortunately, this was saved, then the follow up shot hit the post.
Those watching were then blessed with seeing one of the finest bits of play seen in an U9’s game to date, being from James S who showed fantastic skill and trickery, that a professional would be proud of, to skip round the feet of three players in close proximity and fire a fine shot towards the target only for it to hit the post!
With the hawks comfortably on top of the play they took the opportunity to try a change in formation. Experimenting with only one at the back and two strikers and the change around caused mass confusion at times. Isaac S was composed in defence, always finding a pass then Reece R followed suit when he replaced him at the back, also managing some fine long balls, but they often found themselves isolated as the midfielders struggled to learn where to stand out of possession. This caused Crick to take control for a short spell and they peppered the goal with high shots which Finley D did well to save, with the sun in his eyes.
Crick then took the lead shortly before the break following a misplaced pass by Tom D, at which point the desire to practice a new formation strangely went away and the boys were shuffled to their usual positions for the second half.
The Hawks then dominated right from the the restart. Tom produced a great assist to allow Riley to get his second goal of the match and Jeremy and Lennon twisted and turned in the middle to threaten the goal but fail to get their shot away.
After a short spell in defence, James S was then given a license to attack again and he immediately hit the post for the 2nd time, leaving all gutted that he didn’t have a goal to show for his fine play.
MOTM, Reece R, following his solid last man defending, showed his determination to chase everything down when given a run in midfield and his press caused the Crick midfield to gift a half chance to none other than Tom who rifled the ball into the back of the net for the winner.
Barring a hairy ten minutes in the first half, following a formation never tried, the game was never really felt in doubt. Go Hawks!