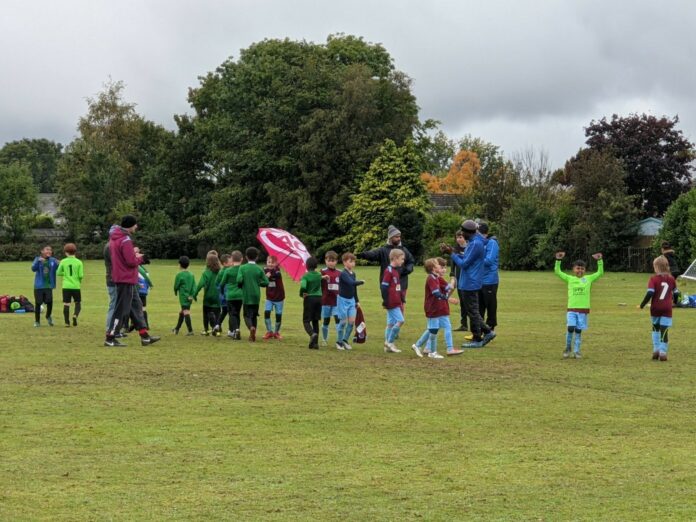 As the rain poured down it was a tentative start to the game by both teams with little to separate them. The Clarets tested the Coventrians goalkeeper early on before the deadlock was finally broken on 7 minutes with a superb clearance from the back from Sonny picking our Ronnie wide on the right hand side who then delivered a pinpoint cross into the box for Arthur to convert into the top of the net.
The Clarets started passing the ball around confidently Max saw his speculative shot slip through the goalkeepers fingers to make it 2-0. Ronnie then struck the post.
Half time brought chaneges from both coaches which initially worked in the favour of The Coventrians as within a few minutes of the restart they managed to level the score back to 2-2, however their growing confidence was quickly dampened as a through ball from midfield found its way to Zavi who managed to turn neatly a slot his shot passed the keeper to give The Clarets a 3-2 advantage.
Both teams battled on with chances coming at both ends of the pitch and some busy periods in defence for Niko and Sonny who both showed their strength and determination to limit the amount of shooting opportunities for The Coventrians. The one shot they did manage to cultivate was heroically stopped by Charlie in goal who was injured in the process and had to be substituted. After some perseverance Ronnie eventually got his reward for his hard work and hit the back of the net giving The Clarets a 4-2 lead.
Into the final 5 minutes continued pressure from the Clarets paid off as Dexter found himself in space to receive a ball from Max, he calmly took a touch before picking his spot and giving The Clarets a 5th goal which was how the game ended.
Full Time 5-2
Man of the Match: Max