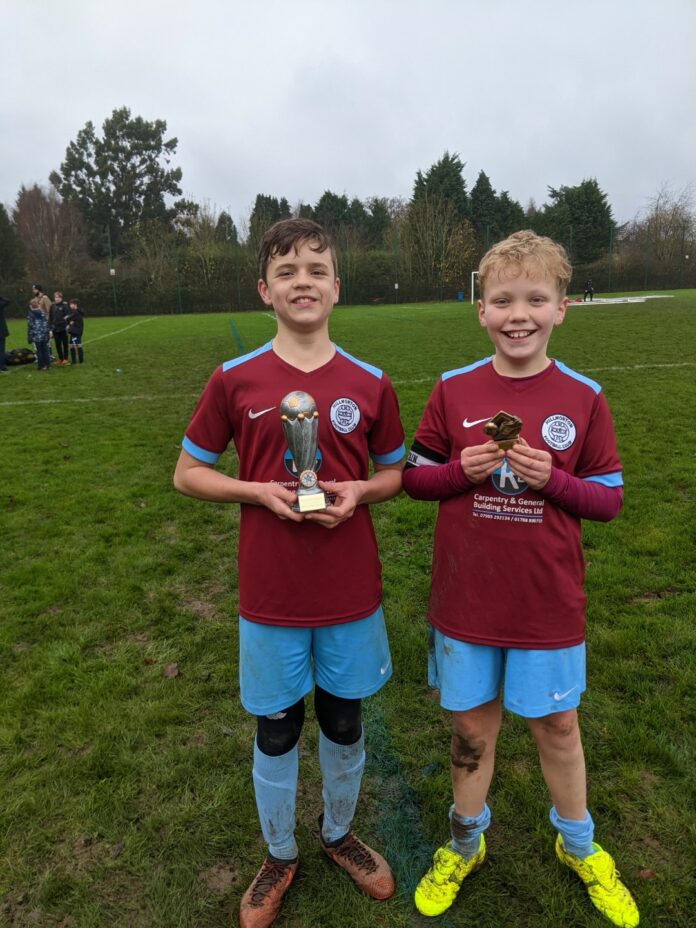 Sponsored by K.B Carpentry & General Building Services & Attingham Consulting Engineers Ltd
Well after 4 weeks off, it was an absolute pleasure to get back to some sense of normality and even better when you witness some of the best football the juniors have played all season. The 2 teams were level on points and results before the game so it was essential that we put some distance between ourselves and Meriden on a pitch, that despite the recent rain, allowed Hillmorton’s passing game to go undisturbed. From the outset the claret and blues began to boss things in midfield with Mason in a class of his own in the middle. Riley terrorised the opposition defenders with a great work rate and he was able to bring TobyB and Archie into play with some neat passing. It was Mason that was the architect of the first goal who pinged a super diagonal pass from the right hand side that Archie gladly lapped up with a super shot into the roof of the net for 1-0. The game though began to swing the other way and up until this point our able defenders, Jay, TobyL and Tom were easily handling a couple of aggressive strikers. Unfortunately though Meriden found a lease of life and a series of corners and free kicks pinned the Juniors back and the pressure started to mount. It was an errant pass that Meriden took advantage of, as the striker found the bottom corner for a well deserved equaliser. Just before half time we had a fair shout for a penalty but the young referee waved away the appeals as the boys trooped off in a rather disconsolate manner.
Luis and I reminded them that they were by far the better team and they needed to raise their standards in the second half if they wanted the points. Riley switched to centre back to provide an encouraging presence, Jay switched to the wing and Hillmorton began to dominated the game. Archie managed to dance past a couple of defenders inside the box before one of them committed a foul, a more obvious penalty than the last claim and this allowed the tricky winger to smash home his second to put the boys in the lead. Meriden weren’t finished though and Olly had to be at his best with a couple of long range shots that he was equal to, he was also called upon to sweep up behind his defenders with some great clearances. Jakub looked assured at right back and had to be at his best to clear a couple of concerning attacks, whilst Noah threatened and worked the opposition defence. The next goal would prove pivotal, little did we know but it would also prove to be the goal of the season! A goal of such beauty it will be imprinted on my mind for years to come, a great counter attacking move that started with Tom’s  forward pass to Archie, who in turn played a give and go with Joseph, then his cross on the run found Mason, who leapt up to plant a forceful header into the top corner for an absolute stunner! Steve I hope you got that on camera!

This was the goal that put the game out of reach and puts Hillmorton within touching distance of the top 4. The upward curve in form continues and we must treat each game like it might be our last, given the current climate. Brilliant game to watch! Well done all of you!
MAN OF THE MATCH – Mason – He was getting this award despite the incredible goal, but that just put the icing on the cake! He was tremendous, battling all over the pitch and his passing range is way beyond his years. Stunning display and should be super proud of himself! Match winner!
BEST EFFORT – Riley – Versatile and vocal, Riley was immense, provided a real attacking outlet up front and when asked put an assured and calming display at the back. A real Captain’s performance with plenty of encouragement, guts and courage! Outstanding!