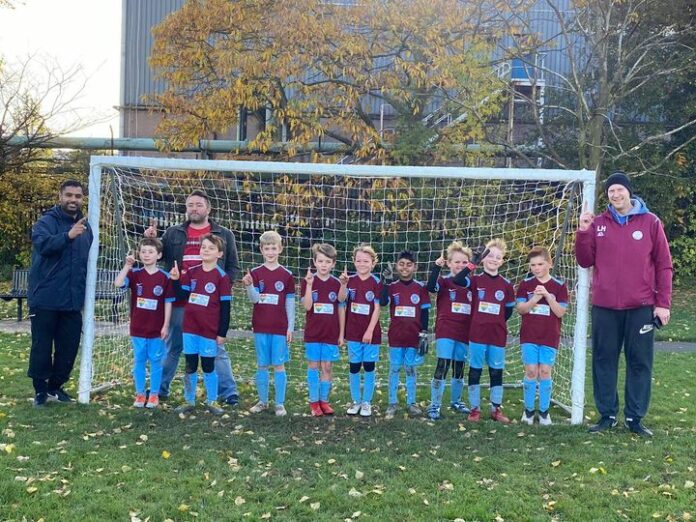 A few minutes behind schedule the game was kicked off by the Coventrians, right from the start it was apparent that the two teams were evenly matched as the play was more akin to a basketball game with end to end attacks from both sets of players.
The Coventrians style of play proved to be quite physical, giving away numerous fouls in the midfield which The Clarets were unable to capitalise on. Both teams battled hard with very few clear opportunities to shoot at goal. Max M made a rare break through and unleashed a shot which was fractionally wide of the near post.
The closest The Clarets came to scoring in the first half came after 22 hard fought minutes when Ronnie R won a free kick in a more advantageous area on the left of the goal, his attempt was drilled in low and narrowly missed, ricocheting of the post.
The Coventrians quickly broke up the other end of the pitch and had a shot on goal which went sailing over the crossbar.
Both coaches made changes throughout the half to introduce fresh legs as every player fought to try and craft and advantage but as the half time whistle blew it was all square.
The second half saw The Clarets make a few changes to the positioning of players with Niko M playing a more advanced role in midfield and Harvey L dropping back into defence to cover, with Niko making some fantastic forward progress and Harvey standing strong making a number of important tackles and interceptions, this proved to make an impact as The Clarets managed to cultivate a few more chances with Max M again unleashing a shot which The Coventrians keeper made a fingertip save to push over the crossbar and deny The Clarets.
Another change from The Clarets saw Zavi G come out of goal and Arthur T taking his place, providing fresh legs up front and more positive pressure from The Clarets.
The game continued with more end to end action, with all the players giving everything, Charlie H and Dexter E both making vital contributions both attacking a defending and Sonny P stamping out any progress made by The Coventrians to shoot at goal.
As the game approached the final 3 minutes The Clarets won a corner resulting in 3 shots and 3 sensational saves by The Coventrians keeper, despite all of the team’s efforts they just couldn’t make the final breakthrough they deserved.
The Conventrains mustered one final attack on The Clarets goal but the threat was dealt with, with Arthur T confidently gathering up the ball.
As the final whistle blew the spectators applauded what had been a fantastic game of football where every player had given all they could, a great demonstration of team spirit and unity be the whole team. Well done The Clarets.
Man of the Match: Zavi G.