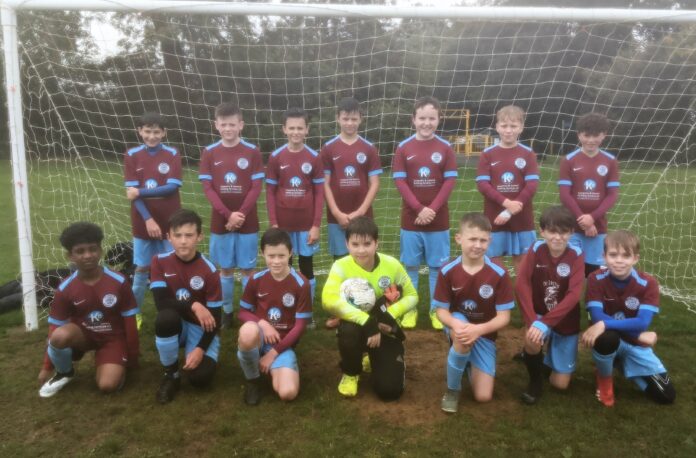 Sponsored by K.B Carpentry & General Building Services & Attingham Consulting Engineers Ltd
Hillmorton saved their performance of the season for a fiercely competitive local derby against Rugby Borough Bears. On a damp morning with heavy rain overnight the ball fizzed around the pitch in the early exchanges with Rugby exerting their authority and pinning the claret and blues back, with a succession of corners. Jay, Olly, Ash and Tom defended with real passion and began to give our wingers an outlet. Hillmorton could count themselves rather fortunate at times as Rugby came close to opening the scoring on a number of occasions, including a curling effort that came back off the post. Joseph was restricted to a couple of long range efforts as Hillmorton had to rely on some counter attacking football as they gradually grew into the game. It was Archie who skipped through to latch onto a pass, but was then felled by the defender as he was about to round the keeper, the referee pointed to the spot and Archie, with neither Luis and I prepared to look, despatched the ball into the corner for 0-1.
There was still work to do at half time though as it was clear that we came off the pitch with luck on our side with a fortunate lead. The next goal was absolutely crucial to the match and the Juniors knew it and began harassing the opposition at every opportunity. The boys were up for it and started playing the ball fluidly and began winning the ball all over the pitch, the passion was immense, with several players influencing the play and encouraging their team mates. Pacey came on to stretch their defence with his natural athleticism, and unluckily hit the bar, TobyL made some great runs down the right and the defence looked very comfortable. The second goal was coming and a team move started it, with Tom picking up the ball from a goal kick and threading the ball wide to Archie who went on a lung busting run and skipped past 3 defenders before playing a perfect cross for Pacey Barnett to tap home, much to the delight of the crowd! Hillmorton restricted Borough to some long range shots, which Olly was equal too, he rescued his side with an out of the box clearance and bravely challenged the opposition striker, but after that it was all Hillmorton who rampaged forward and took the game by the scruff of the neck and refused to let the boys in orange back in the game. An Archie Funnell corner was nodded forward by Joesph and in the melee of defenders pounced Mason who volleyed the ball into the roof of the net for 3-0! With 15 minutes left it was the Juniors who showed some real belief to see out the game and manage the match to get all 3 points and a really important clean sheet!
Luis and I couldn’t have asked for anymore effort, the boys were brilliant and with it being local derby, they can go to school on Monday with a nod and wink to the opposition who had been telling them all week that they were gonna get a beating! The second half was incredible and the boys were just scintillating at times with such belief, effort and passion. Great performance!
MAN OF THE MATCH – Archie – brilliant pace and such unselfish play, some great crosses and was kicked and bruised but kept getting up and taking the game to the opposition with a goal and as assist! Fantastic!
BEST EFFORT – Oliver – An unsung hero at times, constantly shouting and organising and his confidence showed, with some great goal keeping and some fantastic kicks, really comfortable and looked unbeatable! Awesome!