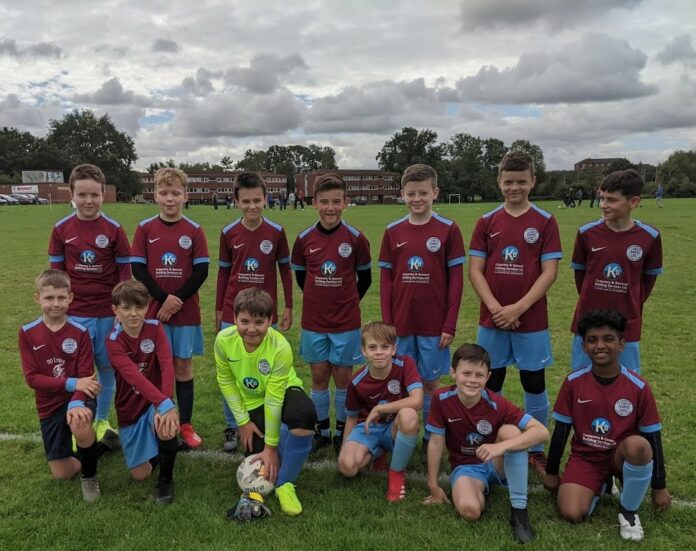 Sponsored by K.B Carpentry & General Building Services & Attingham Consulting Engineers Ltd
With some key players missing this game was always going to be a battle that would test our young braves and the boys really struggled in the first 10 minutes finding themselves 2-0 down, largely due to not defending the long passes that enabled the opposition striker to latch onto and score too easily. The pitch was unusually small, but despite this the Juniors still managed some elaborate passing, but all too often came second best when it came to winning the second ball. Tom and Riley worked hard in Midfield and Ash made a couple of last ditch tackles to keep the score down. With Archie isolated up front it took nearly 25 minutes to muster a shot on goal, which Tom tested the keeper with. This prompted a far better end to the half with the Juniors beginning to match the home team for spirit and desire.
The boys really needed lifting at half time and they went on the pitch knowing that the next goal was very important, sadly it was a stunner from Whitley that dampened our spirits and the boys really couldn’t muster any leadership or belief to think they could get back in the game. With Jay off the pitch with an injury and defensive options limited it was the home side that rifled home the 4th and 5th goals and there was a real danger that we could be in for real rout! With 20 minutes left though the boys dug deep and all of a sudden began to play. Archie moved out to the left hand side and Noah proved a real threat, latching on to any lose balls and chasing everything down. It was his pass that found Archie who skipped past the defender and expertly rounded the keeper at pace, to guide the ball home. All of a sudden there was a some belief and the boys began to work harder for each other. It was Noah that found himself at the edge of the box and he smashed a right foot shot across the keeper, who could only parry the ball into Archie’s path, who needed no invitation to hit his second past the keeper. The opposition were clearly riled by the change in fortunes and a rather mouthy number 9 should count himself lucky he remained on the pitch with his shenanigans at the end. All he did was reassure me that the referee was as appalling in his decision making as the number 9’s behaviour which sadly soured the end of the match.
A frustrating game to watch at times, the boys really lacked leadership, desire and belief, which they really should have in abundance as they are far better than they must think they are. The last 20 minutes proved that they have the ability to turn teams over and if we can just fix a few defensive frailties then we will be ok! Onwards and upwards!
MAN OF THE MATCH – Tom – Worked his socks off in training this week and transferred this to his midfield duties, great tackling, cane close to scoring and was all over the pitch! A real fighter that his teammates can rely on! Awsome!
BEST EFFORT – Noah – I called him a secret weapon before he went on and he probably doesn’t realise it but his tireless running and work rate just provided the extra outlet we didn’t have. 2 assists proved just how important he was in getting us back in the game! Terrific!