The U8 Colts have had a fantastic few seasons in the Coventry & Warwickshire league. Their hard work, relentless performance and continued improvement saw them move up into tier one. The team as a whole benefited hugely from playing at a high level of football. It has allowed them to grow further, improve their technical ability and play some great football.

We welcomed some new team players during our last season both who have been a massive boost to the squad since joining and are a pleasure to train.

The Colts are moving into the Mid & Warwick league this coming season, and will be playing 7 aside football at U9’s level. Myself and the lads are really excited for the challenge ahead and are looking forward to meeting some new faces. 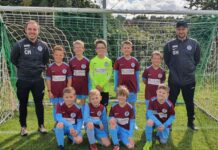